5 of the Best Scenic Train Rides in Switzerland

By Railbookers Friday, November 11, 2022 Read time: 4 minutes
Share:
There really is no better way to explore the small but incredibly beautiful country of Switzerland than by train.

There really is no better way to explore the small but incredibly beautiful country of Switzerland than by train. All of the country's best natural sights - from verdant valleys to dramatic waterfalls and sheer mountain peaks - are train accessible, with a number of these journeys considered the most scenic in the world. Here, we feature 5 of the best, so come along for the ride!

Connecting Chur to Poschiavo in Switzerland, and to Tirano in Italy by crossing the Swiss Engadin Alps, the Bernina Express features breathtaking views from its panoramic, red carriages. The two main lines on the Bernina Express route - the Bernina line and the Albula line - were jointly declared a World Heritage Site in 2008. The Bernina line through this site is a spectacular four-hour journey across 196 bridges, through 55 tunnels and across the stunning Bernina Pass at 7,391 feet above sea level. The first section of the Bernina Express, from Chur to Pontresina, also crosses the famous Landwasser Viaduct, a dramatic, curving single-track viaduct made of limestone and featuring six massive arches. This iconic journey continues to be one of the most popular in the country. 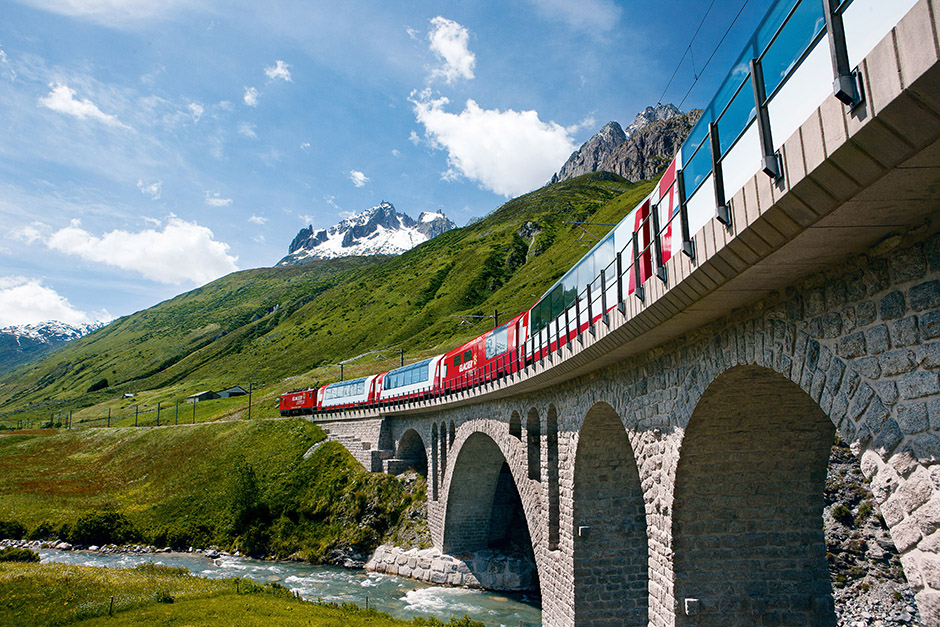 The Glacier Express - known as the 'Slowest Express Train in the World' (and arguably the most scenic) - connects the mountain resort towns of Matterhorn adjacent to Zermatt and St Moritz in the Swiss Alps. Much of the train's spectacular journey passes through the same World Heritage Site as the Bernina Express and boasts equally as impressive views, including the Matterhorn and the Matter Valley, the massive rock walls through the town of Visp, and the sparkling river Rhone, just after departure from Brig. Because the train routes feature similar, but different vistas, many visitors make it a point to ride both the Glacier and Bernina Express during their time in Switzerland. 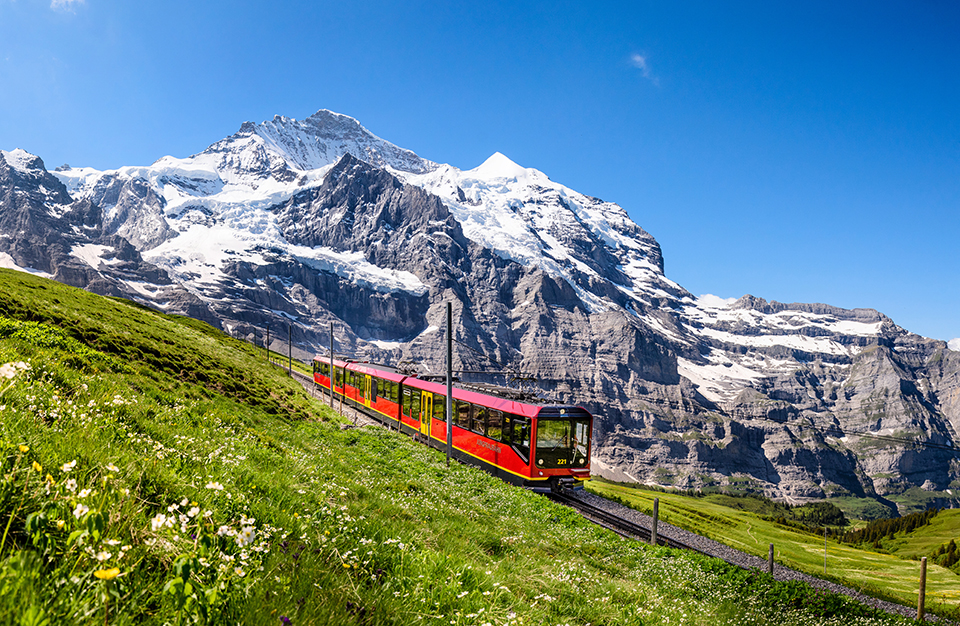 The historic Jungfrau railway line takes visitors to Europe's highest railway station, a whopping 3,453 metres above sea level. The snow-capped Jungfrau Mountain is sandwiched between the huge peaks of the Monch and Eiger Mountains, and part of the Jungfrau railway line tunnels through these two mountains, with spectacular views through windows carefully carved into the mountainside. Once you reach the top, marvel in awe at the amazing views, which can extend as far as the Black Forest of Germany and France on a clear day. The mountain peak features an ice sculpture gallery and the opportunity to take a walk on a glacier, as well as a restaurant and what is believed to be the world's highest chocolate shop. On the way back down the mountain, the route descends through the village of Lauterbrunnen and boasts gorgeous waterfall views. 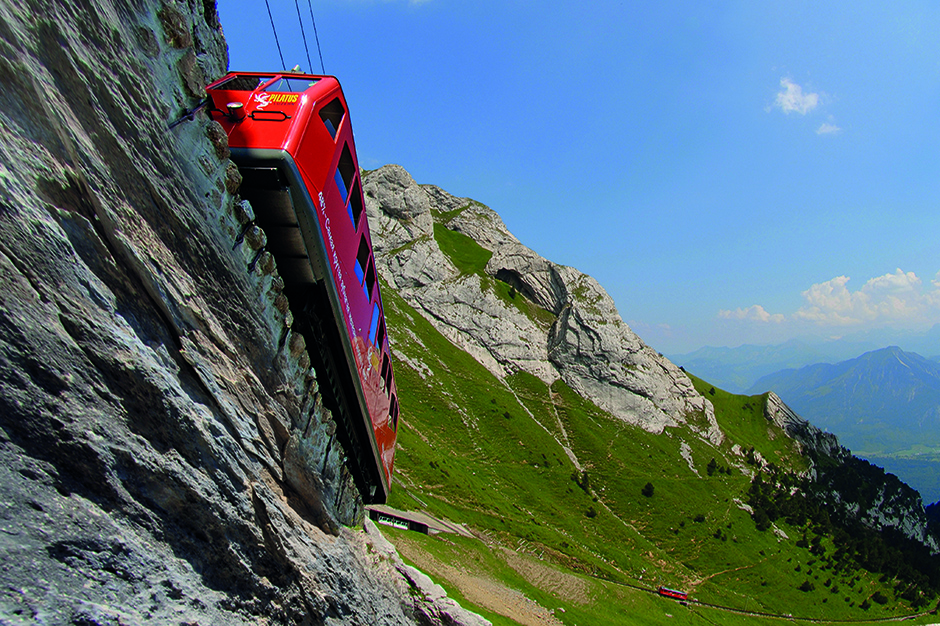 The cogwheel railway to Mount Pilatus in Switzerland boasts the title of the 'Steepest Cogwheel Railway in the World.' The 30-minute journey begins in Alpnachstad and has an average gradient of 35%. The Cogwheel Railway operates between May and November, while at other times the top can be reached via a spectacular aerial gondola and cableway. At the top, you'll find the historic Pilatus Kulm Hotel and restaurant where you can enjoy refreshments, or discover one of the numerous walking trails with stunning views of the surrounding area. 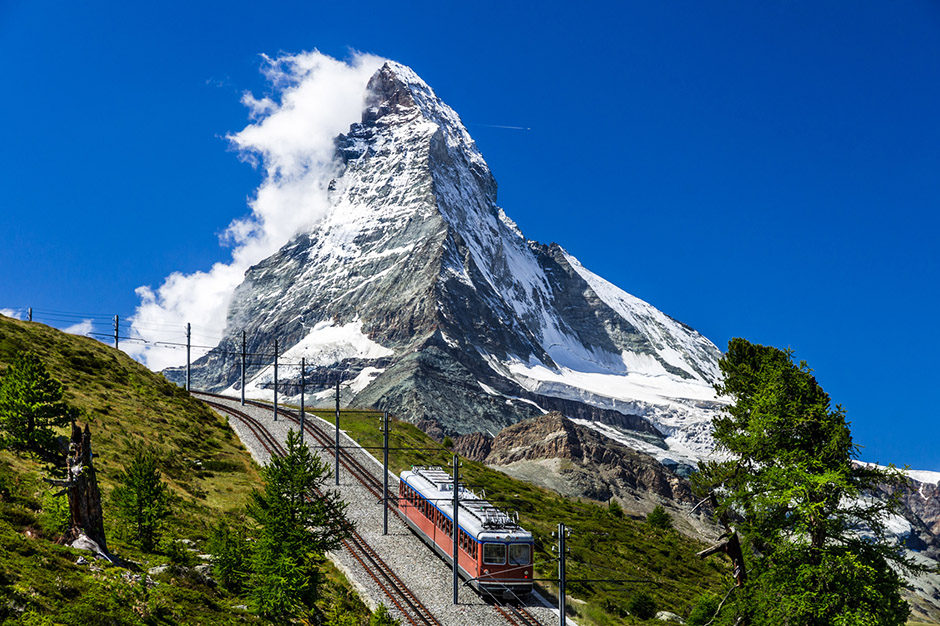 The Gornergrat cog railway is considered a marvel of modern engineering, climbing from 1,603 meters above sea level near the town of Zermatt to 3,089 meters at the top in just 33 minutes. From the top, visitors experience one of the most spectacular panoramas in all of Switzerland - the iconic outline of The Matterhorn as well as the surrounding peaks and glaciers. Enjoy a stroll at the top through the nature reserve and sample a fondue in one of the lovely, panoramic-view restaurants. Take the same route back down to Zermatt where you can enjoy the numerous small bars and restaurants on the car-free roads of this beautiful village.

5 Ways to Experience the Best of Scandinavia by Rail

With so many picture-perfect locations, it's hard to know where to start; but we're here to give...

Offering some of the most scenic views in all of North America, Canada’s excellent long-distance...